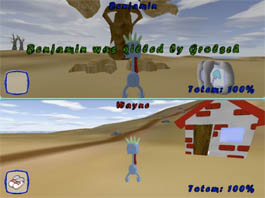 Totem is a jolly amusing 3D computer game with the Qurkelsnurf as the three-dimensional protagonist. It was made by a group of students at Delft University for the course ‘MKT Project 4’ (creating a 3D game). Totem is played by two players, and the objective is to destroy the opponent’s totem. Obviously, this is done using a huge catapult. Although you don’t own a catapult, the playing field just happens to be sprawling with catapult parts. Both players try to gather all the constituent parts before the other does, build the catapult, aim it and destroy your opponent’s totem for once and for all (well, until you restart the game of course). There are moving enemies and all kinds of special items in the game.

Totem was programmed in C# using the Cannibal engine developed at the TU Delft, in the days where DirectX version 9 and MS .Net version 1.1 were state-of-the-art technology. I did some programming, designed (but not modelled) the Qurkelsnurf character and drew the 2D icons used for power-ups and catapult parts: